Sheriff Pat Garrett is best known for having killed the outlaw Billy the Kid in Fort Sumner, New Mexico on July 14, 1881.  Garrett was born in Alabama in 1850 and moved with his family to Louisiana where they owned a plantation.  The family suffered financial reverses during the Civil War followed by the death of his father a few years after the war’s end.

Garrett eventually settled in Fort Sumner, working as a cowboy on the Maxwell Ranch in the 1870s.  He married and shortly thereafter his first wife Juanita Gutierrez died in childbirth.   He then married Juanita’s sister Apolinaria to whom he would remain married until he died.  Apolinaria and Pat had at least seven children, one of whom was Elizabeth.  Elizabeth was legally blind, but was an accomplished musician and is credited with writing the New Mexico State Song, “O Fair New Mexico.”

Garrett became sheriff of Lincoln County, New Mexico in 1880.  At that time, Lincoln County had much larger dimensions than it does today.  The following year his fateful encounter with Billy the Kid occurred.  Garrett was defeated in his bid for reelection by John Poe, after which Garrett and his family moved to Texas.  There he served for a very short time working private security for a Panhandle ranch before before resigning and returning again to New Mexico.  In the mid 1880s, Garrett settled near Roswell, New Mexico and unsuccessfully tried to establish himself in several businesses, including an irrigation business, but was not able to make a go of it.

Garrett returned to Texas and relocated his family to Uvalde in 1892.  In Uvalde, he ran a ranch where he raised cattle and race horses.  It may have been a small operation but it was apparently successful.  Garrett was acquainted with John Nance Garner who was serving as a United States congressman from Texas.  According to Garner, Garrett named two of his race horses after him, one named John Garner and another named John Nance. Garner would later serve as Vice President under Franklin D. Roosevelt during Roosevelt’s first two terms.

Garrett was again drawn back to southern New Mexico when he was appointed sheriff of Doña Ana County in 1897.  A major case during his tenure was the disappearance of Judge Albert Jennings Fountain and his son Henry who were returning by buggy from Lincoln County to their home in Las Cruces.  Their bodies were never recovered.  Garrett tried unsuccessfully to arrest rancher Oliver Lee and an associate named Gilliland for the crime.  This attempt resulted in a shootout in which one of his deputies named Kearney was killed.  Garrett later arrested the two individuals, but they were tried and acquitted for the crime.

In 1901, Garrett was appointed as IRS Customs Collector of El Paso by President Theodore Roosevelt.  He was criticized by several individuals for various matters during his short tenure in that position.  Finally, Roosevelt replaced him with another individual in 1906.

Garrett returned to New Mexico for the last time after being terminated as a federal Customs Collector.  A short time later, he also became a victim of violence.  At the time of his death, he was apparently operating a ranch leased from a land owner by the name of Brazel.  The Albuquerque Citizen carried an article on February 29, 1908 with the headline, “Pat Garrett Who Killed Billy the Kid Meets Sudden Death in Gun Fight.” 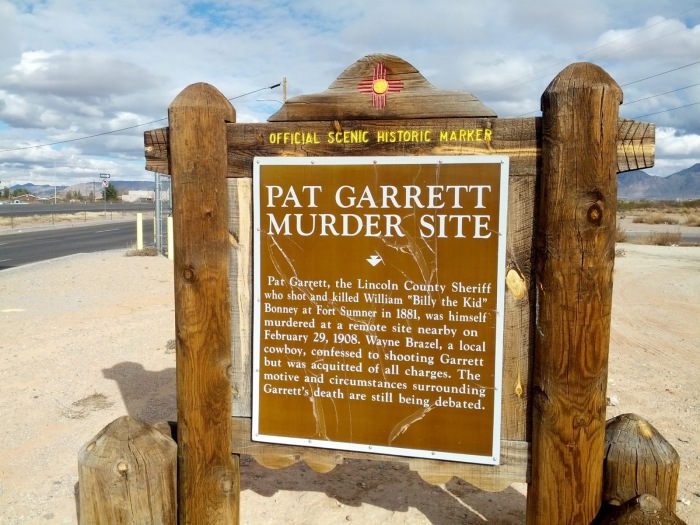 The gunfight happened on the roadway about five miles north of Las Cruces.  The alleged killer was named Jesse Wayne Brazel (also sometimes referred to as Wayne Brazil), a Doña Ana County rancher.  The article said that the incident stemmed from an argument that the men had while they were riding back from Organ, New Mexico and that it pertained to a business dispute.

One account said that the argument involved the use of the leased land and that the land owner, rancher Brazel, was accused of running sheep on land leased to the Garrett family.  Another account maintained that Garrett was reportedly interested in mining properties in the area, which may have led to some disagreement.  Whatever the cause, Garrett was riding in a buggy driven by his associate named Carl Adamson while Brazel rode along side them on horseback.  They stopped on the road near a place called Alameda Arroyo, possibly in order for Adamson and Garrett to take a comfort stop.  Brazel and Garrett continued their argument, which deteriorated into gunfire.  Garrett was shot twice, once in the back of the head and once in the chest with a .45 Colt revolver fired by Brazel.  Garrett’s body was left at the scene.

Brazel turned himself in to Doña Ana Sheriff Felipe Lucero, claiming self defense and stating that it was either himself or Garrett that would have been killed.  Brazel maintained that Garrett got out of the buggy armed with a shotgun and that Brazel, fearing for his life, fired before Garrett could get off a shot.  Other accounts say that Garrett was still unbuttoning his trousers when Brazel fired the first shot, hitting Garrett in the back of the head.  Brazel was brought to trial in April 1909 and, incredibly to some, was acquitted.

Conspiracy theories include the supposition that Adamson had actually fired the fatal shot.  Another was that Adamson’s brother in law, Jim Miller, killed Garrett with a rifle shot from a concealed ambush location.  A third proposed that another local rancher paid Miller and Adamson to set up and commit the murder, though no one other than Brazel was ever tried for the incident.

Jesse Wayne Brazel’s time in New Mexico came to a strange end.  He had moved to Lordsburg, married and started a family. His wife died in childbirth in 1914 and Brazel abruptly disappeared a short time later.  He was never located.  Jim Miller and three associates were lynched in Ada, Oklahoma in 1909 while they were being held for the murder of a former law officer by the name of Gus Bobbitt.  One rumor stated that Miller had confessed to the Garrett murder just moments before he died, but a jailer named Walter Gayne said he didn’t confess and added, “I ought to know.  I hung him.”

Garrett is interred along with Apolinaria and several other family members at Masonic Cemetery, Las Cruces, Doña Ana County.

View all posts by Texoso